GOP candidates for president: Wrapped in a flag and carrying a cross 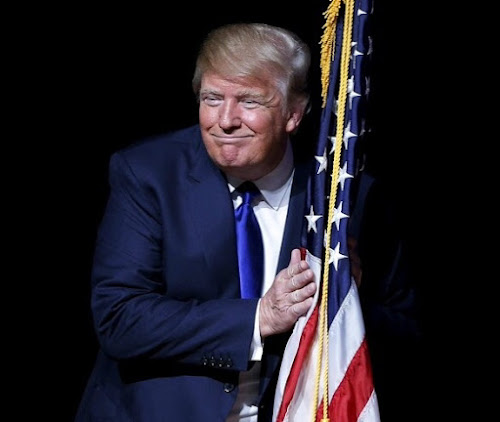 Robert Reich describes the death of the Republican party. The result is more ugly and more dangerous than a viable and vibrant opposition party.

I’m writing to you today to announce the death of the Republican Party. It is no longer a living, vital, animate organization.

It has been replaced by warring tribes:

Libertarians opposed to any government constraint on private behavior.

Market fundamentalists convinced the “free market” can do no wrong.

Billionaires craving even more of the nation’s wealth than they already own.

And white working-class Trumpoids who love Donald and are becoming convinced the greatest threats to their wellbeing are Muslims, blacks, and Mexicans.

Each of these tribes has its own separate political organization, its own distinct sources of campaign funding, its own unique ideology – and its own candidate.

What’s left is a lifeless shell called the Republican Party. But the Grand Old Party inside the shell is no more.

I, for one, regret its passing. Our nation needs political parties to connect up different groups of Americans, sift through prospective candidates, deliberate over priorities, identify common principles, and forge a platform.

The Republican Party used to do these things. Sometimes it did them easily, as when it came together behind William McKinley and Teddy Roosevelt in 1900, Calvin Coolidge in 1924, and Ronald Reagan in 1980.

Sometimes it did them with difficulty, as when it strained to choose Abraham Lincoln in 1860, Barry Goldwater in 1964, and Mitt Romney in 2012.

But there was always enough of a Republican Party to do these important tasks – to span the divides, give force and expression to a set of core beliefs, and come up with a candidate around whom Party regulars could enthusiastically rally.

No longer. And that’s a huge problem for the rest of us.

Without a Republican Party, nothing stands between us and a veritable Star Wars barroom of self-proclaimed wanna-be’s.

Without a Party, anyone runs who’s able to raise (or already possesses) the requisite money – even if he happens to be a pathological narcissist who has never before held public office, even if he’s a knave detested by all his Republican colleagues.

Without a Republican Party, it’s just us and them. And one of them could even become the next President of the United States.

Wrapped in a flag and carrying a cross: "them" is here.

Posted by Sky Island Scriber at 10:06 AM