What is unfolding in American politics has not been seen in over 100 years. And what is happening this year may never have been seen before. We are witnessing the division of one of our two major political parties with what amounts to a divorce between two factions. One is a traditionalist group ("establishment") and the other is an awakened, psychologically distinct movement ("Authoritarians"). The distinction has its roots in psychological and political science research.

The summary of that research, the analysis and synthesis, has produced the most important document of this election year. The report, to be covered in some detail here, enlists fundamental social psychological research in service of our understanding of current political events. We will learn why "all the king's horses and all the king's men" -- the Republican Royalty -- have failed to contain the movement headed by Donald Trump. We will learn why that means that a major political party is fracturing in real time. If my assessment is correct, we are the audience in the theatre of history witnessing a centennial event.

Resistance to the rise of Donald Trump

Here is how the LA Times' editorial leads off (Daily Star editorial this morning).

Donald Trump is not fit to be president of the United States. Many people have said it — politicians of both parties, economists, pundits, business leaders — but millions of GOP primary voters don’t seem to be listening.

Much of the Republican base has taken leave of its senses, a flight blamed alternately on inchoate anger, disgust with inside-the-Beltway candidates and misplaced affection for a plain-speaking cartoon character who often seems to utter whatever nonsense comes into his head.

In another op-ed in the Daily Star, Michael Gerson speculates about strategies before and during the Republican convention that would deny Trump the nomination.

Conservative talk radio shows lit up Friday with incensed callers who said they were “livid,” “mad” and “on the verge of tears” as they listened to Mr. Romney scoldingly describe what he called Mr. Trump’s misogyny, vulgarity and dishonesty, and urged them to abandon him.

“The Trumpists out there,” predicted Rush Limbaugh, “are going to feel like the establishment is trying to manipulate them, sucker them, and they’re just going to dig in deeper.”

Limbaugh's analysis is incredibly important for understanding what is unfolding in 2016 and what it means for American politics in the long run. More on that below.

"take over the GOP or blow it up"

... Steve from Temecula, Calif., said he had a message for Mr. Romney: “The Republican electorate is not a bunch of completely ignorant fools.”

“We know who Donald Trump is,” he added, “and we’re going to use Donald Trump to either take over the G.O.P. or blow it up.”

Frustrated Republicans seized on Mr. Romney’s status as a party insider who was insulated from the realities, indignities and rage of average Americans headed to the polls this year. “He’s an establishment figure,” said Faith Sheptoski-Forbush of Romulus, Mich. “So that’s what you get.”

She called Mr. Romney’s diatribe against Mr. Trump “a desperate attempt” that left her deeply disappointed in him.

But there were positive reactions to Romney's speech.

As Mr. Romney hopped between television stations on Friday, proclaiming his dismay over Mr. Trump’s crudeness, challenging his decency and questioning his integrity, he declared that his overtures were breaking through — though not necessarily to the audience he intended. In an interview conducted inside the headquarters of Bloomberg News in Manhattan, far from the crucial primary voting states that could decide Mr. Trump’s fate, he observed that Midtown office workers had offered their gratitude as he rode up to the studio.

“Just coming up the escalator, Mr. Romney said, people said, “ ‘Thanks for what you did yesterday.’ ”

Contrasting those reactions reveals a deep schism among Republican voters.

Why Humpty cannot be put together again

It is natural that during an election year that the focus is on the candidates. The media combs through the record to reveal their policy positions and their personal foibles. We hear about Sanders' socialism and Clintons's emails. We are forced to hear about Fiorina's face and Trump's hair. But this year, especially this year, the focus on individual candidates is not the main news.

The big story is the voters themselves. The assertion that "millions of GOP primary voters don’t seem to be listening" to "politicians of both parties, economists, pundits, business leaders" is flat-out wrong. They are listening and they do not like what they are hearing. The other assertion that "the Republican base has taken leave of its senses" is just as wrong. The part of the Republican base responsible for Trump's lead in the polls and at the ballot box is perfectly sensible; they are just not well understood by the "politicians of both parties, economists, pundits, business leaders". So who are those voters?

Of particular interest is that subset of mainly Republican voters who are called, for want of a better term, Authoritarians. They are not "Trumpist" and there is no "Trumpism" (even though I've used those terms myself). Those terms are candidate-centered and thus misleading about the underlying psychology. Those voters represent a movement that has gained voice through Trump. We are witnessing "The rise of American authoritarianism". That's the title of a review of research on Authoritarians by Amanda Taub at Vox.com (see also AZBlueMeanie's review of related articles)

The quotes above from some of Trump's supporters reflect a widening split between Republicans - between the Establishment (Elites, Traditionals) and the new Authoritarians. Research on the authoritarian personality suggests a new alignment in American politics. The more the Establishment leans on Trump, the more alienated and defensive his Authoritarian supporters become. Similarly, the more the Democratic candidates advocate for social change and a restrained military, the more threatened the Authoritarians become. The irony here is that both the Republican Establishment and the Democrats are sources of external threat which activates Authoritarian tendencies. Usually external threat tends to draw people together and reduce intra-group differences. But in this case the threat comes from within the Republican party, a party that increasingly seems fatally divided.

Some of the staunchest conservatives blanch at the ideas espoused by Trump. But those ideas, to the extent that he voices them, reflect the beliefs of the Authoritarians who support him. It is hard to see how those groups can be united given the mutual dislike and distrust. Even if they were to come together in 2016 to defeat the Democratic nominee, the schism will be a lingering, festering wound in the "Republican" "party".

A précis of modern research on the Authoritarians

What do we know about Authoritarians? The answer is important because one of the puzzles of the rise of Trump has been why he attracted so many so quickly.

The following snippets are from Taub's "The rise of American authoritarianism".

[Matthew MacWillians, a PhD student at U. Mass.] polled a large sample of likely voters, looking for correlations between support for Trump and views that align with authoritarianism. What he found was astonishing: Not only did authoritarianism correlate, but it seemed to predict support for Trump more reliably than virtually any other indicator. He later repeated the same poll in South Carolina, shortly before the primary there, and found the same results, which he published in Vox ...

Here, in a single chart, is the principle result of MacWilliams' research. Individuals who score highly on measures of Authoritarianism are also those who are most likely to support Trump. 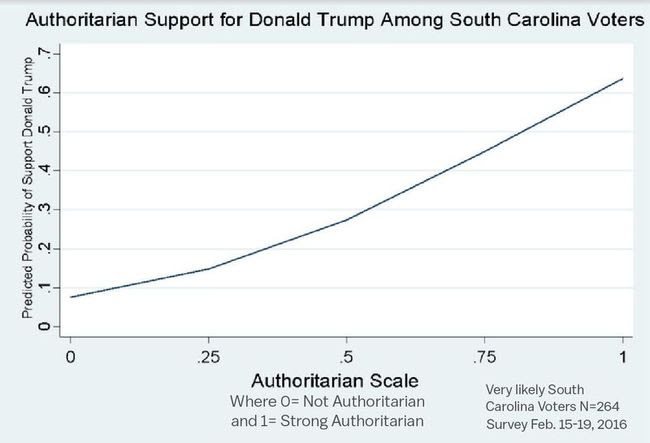 [Another research group headed by] Hetherington and Weiler published a book about the effects of authoritarianism on American politics. Through a series of experiments and careful data analysis, they had come to a surprising conclusion: Much of the polarization dividing American politics was fueled not just by gerrymandering or money in politics or the other oft-cited variables, but by an unnoticed but surprisingly large electoral group — authoritarians.

Their book concluded that the GOP, by positioning itself as the party of traditional values and law and order, had unknowingly attracted what would turn out to be a vast and previously bipartisan population of Americans with authoritarian tendencies.

This trend had been accelerated in recent years by demographic and economic changes such as immigration, which "activated" authoritarian tendencies, leading many Americans to seek out a strongman leader who would preserve a status quo they feel is under threat and impose order on a world they perceive as increasingly alien.

These Americans with authoritarian views, they found, were sorting into the GOP, driving polarization. But they were also creating a divide within the party, at first latent, between traditional Republican voters and this group whose views were simultaneously less orthodox and, often, more extreme.

The field [of research on Authoritarians] has come to develop the contours of a grand theory of authoritarianism, culminating quite recently, in 2005, with [Karen] Stenner's seminal The Authoritarian Dynamic — just in time for that theory to seemingly come true, more rapidly and in greater force than any of them had imagined, in the personage of one Donald Trump and his norm-shattering rise.

According to Stenner's theory, there is a certain subset of people who hold latent authoritarian tendencies. These tendencies can be triggered or "activated" by the perception of physical threats or by destabilizing social change, leading those individuals to desire policies and leaders that we might more colloquially call authoritarian.

It is as if, the NYU professor [ and author of The Righteous Mind ] Jonathan Haidt has written, a button is pushed that says, "In case of moral threat, lock down the borders, kick out those who are different, and punish those who are morally deviant."

But political scientists say this theory explains much more than just Donald Trump, placing him within larger trends in American politics: polarization, the rightward shift of the Republican Party, and the rise within that party of a dissident faction challenging GOP orthodoxies and upending American politics.

More than that, authoritarianism reveals the connections between several seemingly disparate stories about American politics. And it suggest that a combination of demographic, economic, and political forces, by awakening this authoritarian class of voters that has coalesced around Trump, have created what is essentially a new political party within the GOP — a phenomenon that broke into public view with the 2016 election but will persist long after it has ended.

Conclusions about Authoritarians in America's politics

... Authoritarians may be a slight majority within the GOP, and thus able to force their will within the party, but they are too few and their views too unpopular to win a national election on their own.

And so the rise of authoritarianism as a force within American politics means we may now have a de facto three-party system: the Democrats, the GOP establishment, and the GOP authoritarians.

... although the latter two groups are presently forced into an awkward coalition, the GOP establishment has demonstrated a complete inability to regain control over the renegade authoritarians, and the authoritarians are actively opposed to the establishment's centrist goals and uninterested in its economic platform.

For decades, the Republican Party has been winning over authoritarians by implicitly promising to stand firm against the tide of social change, and to be the party of force and power rather than the party of negotiation and compromise. But now it may be discovering that its strategy has worked too well — and threatens to tear the party apart.

Now, you can see, why I've capitalized Authoritarian. It is my way of elevating that group to the same status as Democrat and Republican.

You owe it to your understanding of current events to read all of Taub's article. Its target audience is you. Here are links to parts of her article that you can use to read it in manageable chunks.

Whatever your reading preference, please, please read this article in its entirety. Now! History is happening and it will not wait for you.

Posted by Sky Island Scriber at 7:56 AM