Is Donald Trump an Angry Android?

"An android is a robot or synthetic organism designed to look and act like a human, especially one with a body having a flesh-like resemblance. Historically, androids remained completely within the domain of science fiction where they are frequently seen in film and television. Only recently have advancements in robot technology allowed the design of functional and realistic humanoid robots." - Wikipedia

But sometimes reality competes with fiction, as suggested by the above quote. Wiki provides a listing of fictional robots and androids in books and movies. I would like us to entertain the conjecture that Trump is an android.

I must admit that the evidence for my conjecture is meager and speculative. For example, no decent human being would say some of the things that Trump has said. Recall his feud with the Gold Star Khan family. His economic "policy" is heartless and without compassion for any but the rich.

He may or may not be an android, but we know he prefers the Android cell phone and uses it for his tweets. There is now hard evidence from text analysis on this point.

"David Robinson is a data scientist at Stack Overflow. In May 2015 he received his PhD in quantitative and computational biology from Princeton University. His interests include statistics, data analysis, genomics, education, and programming in R and Python. You can read more of his work at his blog, Variance Explained." The analyses mentioned here were reprinted in Mashable.com.

Robinson analyzed hundreds of tweets from two phones, an iPhone and Trump's Android phone and makes these observations.

When Trump wishes the Olympic team good luck, he’s tweeting from his iPhone. When he’s insulting a rival, he’s usually tweeting from an Android. Is this an artifact showing which tweets are Trump’s own and which are by some handler?

Others have explored Trump’s timeline and noticed this tends to hold up — and Trump himself does indeed tweet from a Samsung Galaxy. But how could we examine it quantitatively? I’ve been writing about text mining and sentiment analysis recently, particularly during my development of the tidytext R package with Julia Silge, and this is a great opportunity to apply it again.

My analysis, shown below, concludes that the Android and iPhone tweets are clearly from different people, posting during different times of day and using hashtags, links, and retweets in distinct ways. What’s more, we can see that the Android tweets are angrier and more negative, while the iPhone tweets tend to be benign announcements and pictures. ... this lets us tell the difference between the campaign’s tweets (iPhone) and Trump’s own (Android).

Most hashtags come from the iPhone. Indeed, almost no tweets from Trump’s Android contained hashtags, with some rare exceptions like this one. (This is true only because we filtered out the quoted “retweets”, as Trump does sometimes quote tweets like this that contain hashtags).

Words like “join” and “tomorrow”, and times like “7pm”, also came only from the iPhone. The iPhone is clearly responsible for event announcements like this one (“Join me in Houston, Texas tomorrow night at 7pm!”)

A lot of “emotionally charged” words, like “badly”, “crazy”, “weak”, and “dumb”, were overwhelmingly more common on Android. This supports the original hypothesis that this is the “angrier” or more hyperbolic account.

Following is a graphic display of some of Robinson's results. It shows a clear demarkation between emotionally charged words (from Android tweets) and other words (from iPhone tweets). 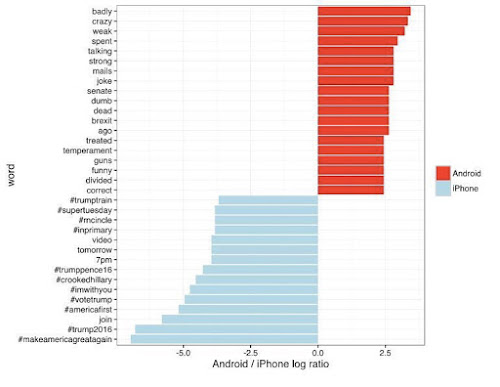 If Trump is an android, he is an angry one.