Secretary of State nominations: The cat, the mouse, and a general

The NY Times and the New Yorker are covering the nomination possibilities for Secretary of State. The Times notes “The contest for secretary of state has become the most protracted and closely watched of Mr. Trump’s transition. People briefed on the transition say the president-elect is now considering three candidates in addition to Mr. [David]Petraeus: Mitt Romney, the former Republican presidential nominee; Rudolph W. Giuliani, the former mayor of New York City; and Senator Bob Corker, the Tennessee Republican who is chairman of the Foreign Relations Committee.”


To the accompaniment of whirring cameras, Romney explained that he was “very impressed by the remarks he made on his victory night.” He went on, ”By the way, it’s not easy winning. I know that myself. He did something I tried to do and was unsuccessful in. He won the general election and he continues with a message of inclusion and bringing people together, and his vision is something which obviously connected with the American people in a very powerful way.”

No, you didn’t misread that quote. Romney credited Trump for having a message of inclusion. And he wasn’t done. He also praised Trump for conducting his transition effectively and picking “solid, effective, capable people.” (Perhaps you’ve heard that Sarah Palin is in the running for Secretary of Veterans Affairs?) Romney finished his remarks by saying that he had “increasing hope that President-elect Trump is the very man who can lead us to that better future.”

Continue reading, if you have not already departed for the retch room. Romney apparently had not yet heard Trump’s speech at his first victory rally last evening (Dec. 2) in which Trump claimed to be a unifying force and then trashed everyone, mainly the press.. The sad thing was that, in touting a billionaire for Commerce Secretary, Trump claimed he was a good choice because he knew how to make money. The implicit comparison was to the working class audience. I guess they don’t know how to make money. The Ayn-Randian insult was lost on the crowd. “Trump, Trump, Trump.”


… the cynical explanation is that Romney is in it for himself. He’s sixty-nine, and this is almost certainly his last chance to hold high government office. “Romney critics—and those are the people pushing this theory—point to his past flip-flops on such issues as abortion and gay marriage as evidence that when a deeply held belief comes up against Romney’s ambition, ambition always wins,” the Washington Post’s Chris Cillizza noted on Wednesday. “So, Romney wants to be secretary of state more than he hates Trump. It’s that simple a calculation.”

Whatever the real explanation is, Romney is risking what is left of his reputation. As Secretary of State, he would have to work with, and act as a global emissary for, someone who, to use Romney’s own words from March, has “neither the temperament nor the judgment to be President,” someone whose “personal qualities would mean that America would cease to be a shining city on a hill.” Maybe Romney genuinely believes he can put lipstick on a pig, or, at least, prevent Trump for doing something catastrophic. But surely the prospect cannot fill him with joy.

And that’s assuming he gets the job. According to reports on Wednesday afternoon, he’s one of four remaining contenders. Trump’s short list for Foggy Bottom still includes Rudy Giuliani, the former New York City mayor; David Petraeus, the former general and C.I.A. director; and the Republican Senator Bob Corker, the reports said. What if Romney, after having gone back on his earlier statements and courted Trump so publicly, gets passed over anyway? Well, his humiliation will be complete. 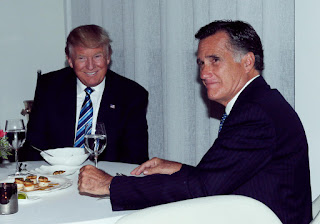 Even now, it is pretty far advanced. During the dinner at Jean-Georges, Drew Angerer, a photographer with Getty Images News, was admitted to the restaurant, where he took a picture of the two erstwhile foes. Trump had a sly-looking grin on his face. Romney appeared to be grimacing. “Donald Trump looks like a cat that caught a mouse and is now batting it around with its paws until it dies,” Taegan Goddard, the publisher of Political Wire, wrote on Twitter. “Romney is the mouse.”

Even while Romney’s star might be dimming just a bit, former General and CIA Director David Petraeus’ chances are on the rise. On reason is that Trump loyalists are vehemently opposed to Romney because of his harsh criticism of Trump during the campaign. Another, well, read some of the Times’ story Secretary of State David Petraeus? Supporters Make Their Case.


… As President-elect Donald J. Trump continues his search for a secretary of state — a conspicuously public effort, in which the fortunes of the candidates rise and fall like characters in a political potboiler — allies of one of those candidates, David H. Petraeus, are mounting a vigorous lobbying campaign on his behalf.

Two influential Republican national security figures — Senators John McCain of Arizona and Lindsey Graham of South Carolina — spoke out publicly in favor of Mr. Petraeus this week, declaring that he was well qualified and saying his confirmation would not be hindered by his having pleaded guilty to mishandling classified material and being forced to resign as director of the C.I.A.

“He’s one of the most talented and capable leaders I have ever known,” Mr. McCain, who is chairman of the Senate Armed Services Committee, said in one of the most animated exchanges he has had with reporters since he was re-elected last month.

You read that right. McCain and his sidekick are willing to forgive and (work on getting the public to) forget Petraeus’ transgressions. And about Congress’ treatment of Hillary Clinton? McCain wants us to move on. Read on.


As for the scandal involving the leaking of classified material — in which Mr. Petraeus resigned after the disclosure that he had given a confidential diary to his biographer and mistress, Paula Broadwell — Mr. McCain said, “I think people make mistakes in life and you move on.”

Among the major questions is whether Mr. Petraeus would be able to regain his security clearance; experts say Mr. Trump would be able to override any objections to that through his executive privilege.

But Democrats would be likely to use a Petraeus nomination as a way to portray Mr. Trump as a hypocrite. He hammered Hillary Clinton throughout the campaign for her use of a personal email address and computer server, saying that she should be jailed, even after the F.B.I. director, James B. Comey, said her misconduct had been less serious than that of Mr. Petraeus.

Of course Trump is a hypocrite. But that does not mean a thing in Trumpworld where there is no shame.
Posted by Sky Island Scriber at 6:36 AM