Another crazy week in the Trumpiverse told in cartoons

It’s getting harder and harder to pick a favorite toon from the Monday morning cartoons offered by AZBlueMeanie.. There’s just too much $#!t going on. 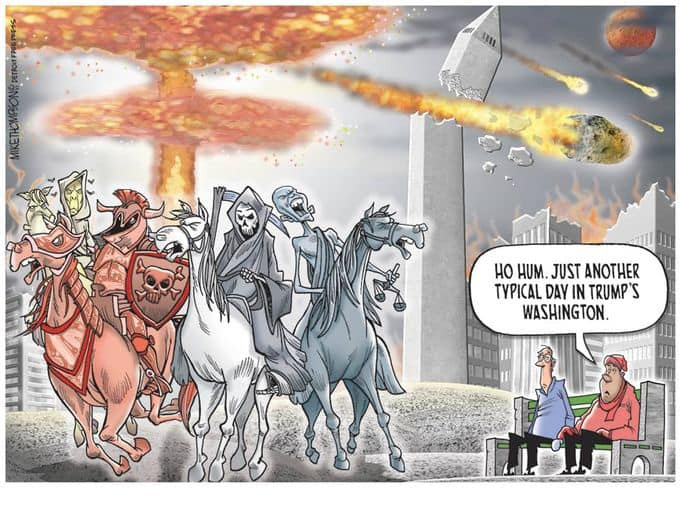 The Senate did its duty in advising for and consenting to the confirmation of Betsy DeVos to head the Department of Education - without anything apparent in her head about public education. It took a tie breaker to do it. On the brighter side, a 3-judge panel of the 9th Circuit Court bopped Trump for his ill-thought-out ban on immigrant travel - bigly. The panel consisted of two Dems and one Republican. And that was after another Republican judge ruled against the ban. Goes to show ya. Four judges wield as much power as 50 Senators and a Vice President. And Kellyanne Conway screwed up big time by shilling for Ivanka Trump, pushing Trump’s “stuff” on national TV. The only problem is that there is a law against that. Never mind. Her boss, the tweeter in chief, thought what she did was was OK. He should know. He still has major conflicts of interest as his other kids continue to make him richer with more global entanglements. See? What’d I say? Check the toons for all this and more.

Posted by Sky Island Scriber at 6:14 AM