Here is commentary on the Park Service photos from Daily Kos. 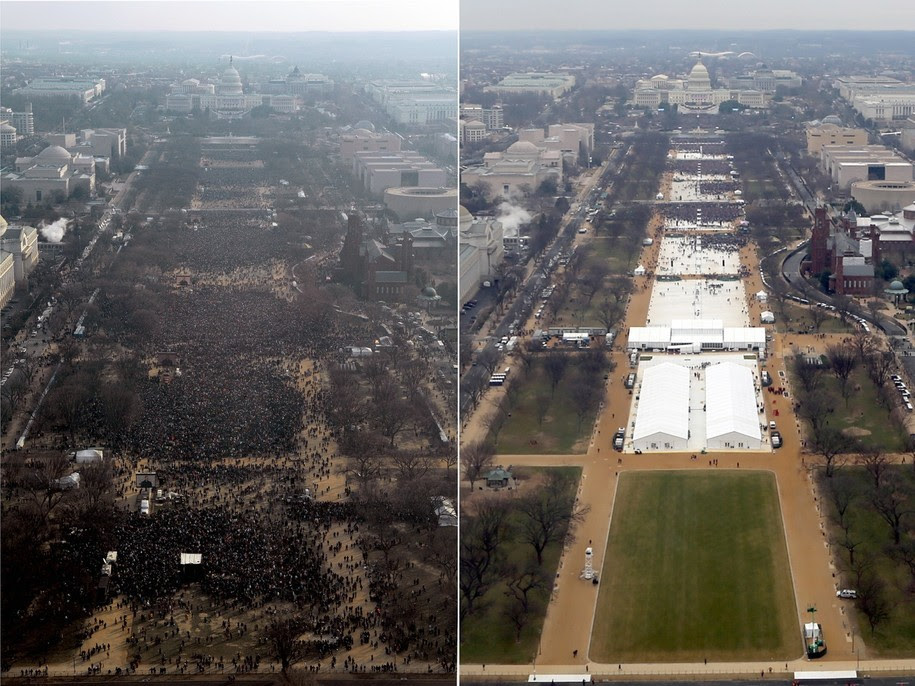 In an alternate reality where Donald Trump was not a giant narcissistic baby, his puny inauguration crowd size would have faded from the news after a day or two of jokes. Instead, Trump’s extended temper tantrum has made the story the gift that keeps on giving. Here we are, more than a month after the event, and the National Park Service’s release of inauguration photos is news—because while they show exactly what anyone with eyes could see at the time, they also show something Trump and his lackeys had vigorously contested.

So, because there was a debate and the pr*sident of the United States insisted on something the rest of the world thought was clearly untrue, here is the latest word based on official government photos:

… it’s pretty clear that the crowd size at the 45th president’s inaugural was smaller than at the swearing-in of the 44th.

The discrepancy is clear in the two photos displayed here, which show the National Mall shortly before Obama and Trump were sworn-in around noon eight years apart. The 2009 and 2017 photos were taken one hour — and eight years — apart, with Obama’s crowds massing in the photo about one hour earlier than Trump’s audience.

Trump so badly didn’t want this to be true that he sent Sean Spicer out to lie about it. He demanded photos from the National Park Service, hoping they would show the crowd of his fantasies. And by doing all that, he just prolonged the story. He showed the world how to get under his skin. If you needed to know anything about what a weak loser Trump is, this story has it all: how unpopular he is, how desperate he is to be lied to, and how naked and bullying that desperation is.

Posted by Sky Island Scriber at 6:17 AM