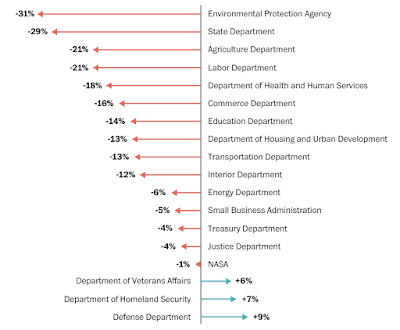 Given the accompanying graphic (from Washington Post), you might side with those who regard it as policy-wise so very wrong-headed, so anti-humanitarian that it is appropriately called “evil.”

But keep an open mind as you read Alexandra Petri’s Washington Post/ComPost column Trump’s budget makes perfect sense and will fix America, and I will tell you why - and boy does she ever!


Some people are complaining that the budget proffered by the Trump administration, despite its wonderful macho-sounding name, is too vague and makes all sorts of cuts to needed programs in favor of increasing military spending by leaps and bounds. These people are wimps. Office of Management and Budget Director Mick Mulvaney has called it a “hard power budget” which is, I think, the name of an exercise program where you eat only what you can catch, pump up your guns and then punch the impoverished in the face. This, conveniently, is also what the budget does.

This budget will make America a lean, mean fighting machine with bulging, rippling muscles and not an ounce of fat. America has been weak and soft for too long. BUT HOW WILL I SURVIVE ON THIS BUDGET? you may be wondering. I AM A HUMAN CHILD, NOT A COSTLY FIGHTER JET. You may not survive, but that is because you are SOFT and WEAK, something this budget is designed to eliminate. 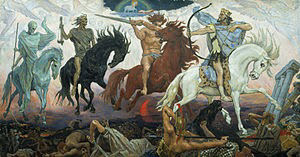 And so it will if it passes. The four horsemen of the Trumpocalypse have something for you.
Posted by Sky Island Scriber at 10:33 AM