Democrats in need of a powerful alternative, a reason for running, to connect to voters

In this post a long-time activist/organizer, Marshal Ganz, and, via a book review, columnist Matt Taibbi, reflect on the 2016 election and what needs to be done for Democrats to recover (from what ails them).

Wanted: A Democratic powerful alternative - “a different story of why things are screwed up”

Can The Democrats Get Organized? An Interview With Marshall Ganz is a very long transcription of the interview with John Judis at TalkingPointsMemo. (h/t Ann Striker)

Here is a small sample of snippets. Judis begins with an introduction to Ganz.

In the spring of 2007, famed union organizer Marshall Ganz began meeting with the Obama campaign. Ganz persuaded them to create a field operation using the techniques that Ganz had developed with the United Farm Workers in California. Thus the army of thousands of volunteers that helped Obama win the Democratic primary and the presidency in 2008 was born. Ganz, 73, is from Bakersfield, California, the son of a rabbi. He dropped out of Harvard in 1964 to work with a Southern student civil rights group, the Student Nonviolent Coordinating Committee (SNCC). The next year he moved back to California to join Cesar Chavez’s fledgling movement to organize the state’s migrant farm workers into a union, eventually becoming the United Farm Workers’ Director of Organizing. In 1991, Ganz returned to Harvard to get his B.A. and in 2000 received a Ph.D. in sociology. For three decades, he has been lecturing in the principles of organizing at Harvard’s Kennedy School, while remaining deeply involved in organizing projects in the United States and overseas. I wanted to ask him about the prospects of the left, liberals and the Democratic Party in the face of Donald Trump’s presidency and Republican control of Congress and the majority of statehouses.

Judis: What is Indivisible?

Ganz: They are a bunch of congressional staffers, one is an SEIU [Service Employees International Union] guy. They got the idea of doing to the Republicans what the Tea Party did to the Democrats. The put out a very simple, accessible manual of how to do that, and they got it out there in a very timely way, and it really clicked with people. They weren’t asking people to send emails or sign petitions. They are asking people to organize locally in the form of those town meetings they are having with the Republicans just like the Tea Party did. And it really took off. They’ve scaffolded some 7,000 groups. They are in every congressional district except for one. What they have done is to scaffold a barebones structure enabling people to focus on a specific tactic. Now the question is how they can take it to the next step. But that’s a very helpful development because of its scale, its depth and its simplicity. …

I really want to underscore the significance of Indivisible. It’s the same experience we had with Obama in 2007 and 2008. You create a plausible pathway to action and all kinds of people come out of the woodwork. The problem is that there haven’t been many plausible pathways to action. And that’s a strategic responsibility, and it requires creating enough structure so that that kind of strategy can be developed and articulated.

Can the traditional Democratic Party machinery do that?

Ganz: The DNC is a distraction. If you look at what the RNC did for the Republican resurgence, it was not much. If you expect the DCCC or the DNC to do it for the Democrats, you’ll be disappointed. Dean temporarily defied the logic with his 50 state strategy. The usual business about not campaigning in every district is so counter-productive. If you look at it from a purely financial standpoint, we have to invest the money where there is the greatest marginal payoff, but it is all short-term. It is not looking at base building, so all these red areas never even hear a counter argument because nobody runs. It is not shocking that all they have is the Fox view of the world. It’s not being challenged.

Democratic politics depends on contention and challenge. One way to do that is through campaigns. It takes people with courage to run for school board. That is one piece of that I just don’t see happening through the DNC.

Judis: Now let’s talk about Trump. If you heard his inaugural address or his speech in Melbourne on Feb. 19, Trump was doing a lot of what you wanted Obama and the Democrats to do. He was telling a story about “making America great again.” He was calling for a movement. He was using the bully pulpit. He was advocating not compromising. Isn’t he doing exactly what you wanted Obama to do after he got elected? Isn’t he following your script?

Ganz: Pretty much. I think the big difference other than the specific values is that at the core, Trump is saying “Follow me and I will take care of you.” It’s mobilizing, but it’s building a movement around dependency. It’s a fear-based movement. Obama or Bernie were inviting their followers to greater agency and autonomy, not less. And that makes all the difference in the world. Their campaigns weren’t about creating dependency on some great leader who is going to save you from everything.

Ganz: … When it comes to organizing at the base, … , you have to have an alternative account. You have to have a different story of why things are screwed up. Bernie came closest to that of anybody recently.

Judis: And the Clinton campaign ignored having an alternative account?

Ganz: They neither motivated their own base nor did they take on his base. They didn’t try to promote Hillary. They tried to undo Trump, but not by offering a powerful alternative. There were ads saying this guy is a racist. What does that do for me? 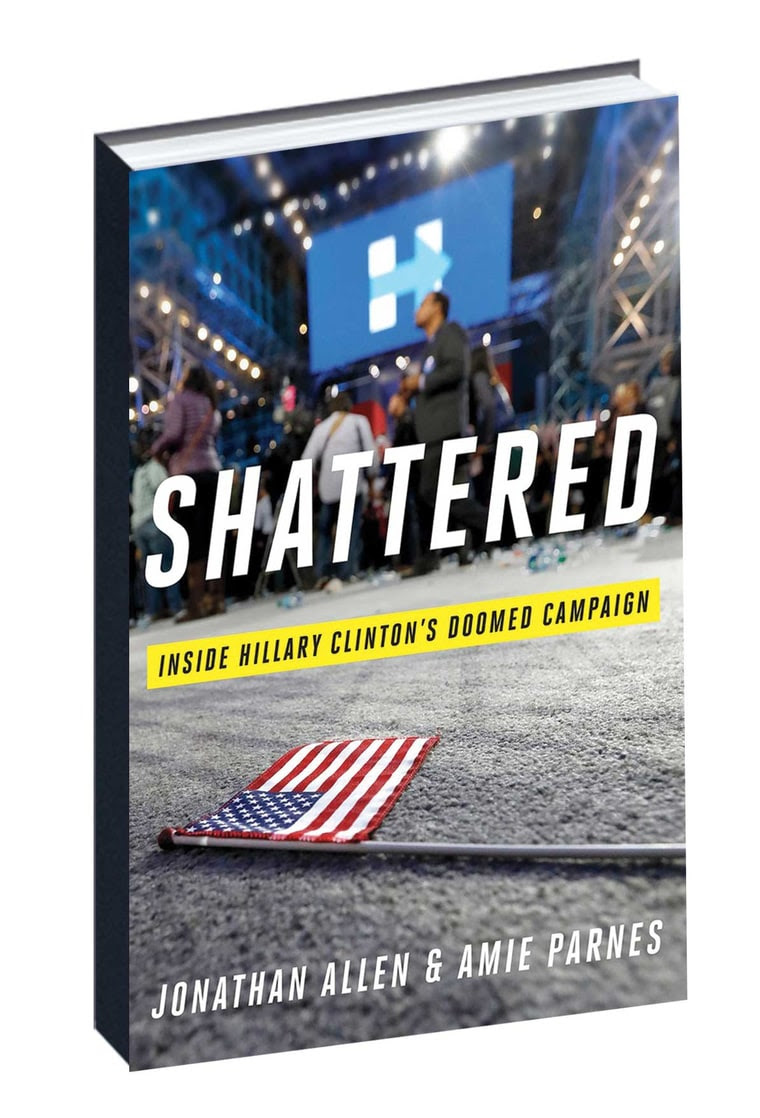 Bob Lord at Blog for Arizona reviews a review in Taibbi on “Shattered”: A Book Review Perhaps More Important than the Book. So, I went to the source …

No reason for running?

There is a critical scene in Shattered, the new behind-the-scenes campaign diary by Jonathan Allen and Amie Parnes, in which staffers in the Hillary Clinton campaign begin to bicker with one another.

At the end of Chapter One, which is entirely about that campaign’s exhausting and fruitless search for a plausible explanation for why Hillary was running, writers Allen and Parnes talk about the infighting problem.

“All of the jockeying might have been all right, but for a root problem that confounded everyone on the campaign and outside it,” they wrote. “Hillary had been running for president for almost a decade and still didn’t really have a rationale.”

“I would have had a reason for running,” one of her top aides said, “or I wouldn’t have run.”

The beleaguered Clinton staff spent the better part of two years trying to roll this insane tautology – “I have a reason for running because no one runs without a reason” – into the White House. It was a Beltway take on the classic Descartes formulation: “I seek re-election, therefore I am… seeking re-election.”

Shattered is sourced almost entirely to figures inside the Clinton campaign who were and are deeply loyal to Clinton. Yet those sources tell of a campaign that spent nearly two years paralyzed by simple existential questions: Why are we running? What do we stand for?

Through the politician’s lens darkly

… Washington politicians tend to view everything through an insider lens. 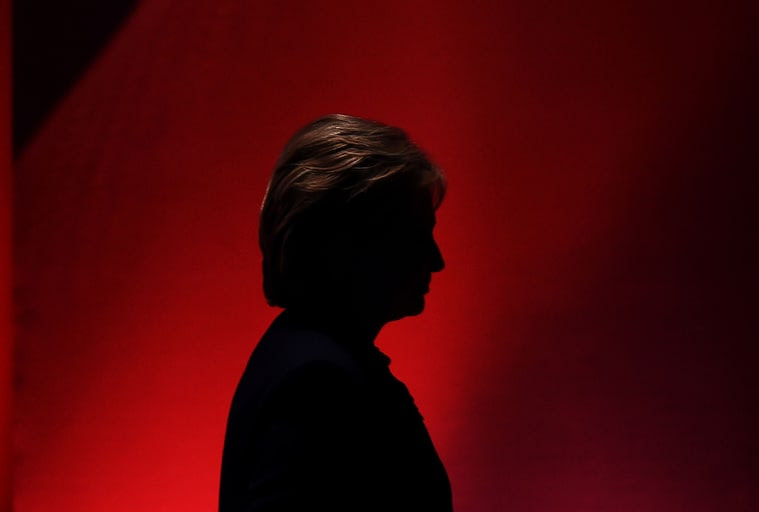 Most don’t see elections as organic movements within populations of millions, but as dueling contests of “whip-smart” organizers who know how to get the cattle to vote the right way. If someone wins an election, the inevitable Beltway conclusion is that the winner had better puppeteers.

The Clinton campaign in 2016, for instance, never saw the Bernie Sanders campaign as being driven by millions of people who over the course of decades had become dissatisfied with the party. They instead saw one cheap stunt pulled by an illegitimate back-bencher, foolishness that would be ended if Sanders himself could somehow be removed.

“Bill and Hillary had wanted to put [Sanders] down like a junkyard dog early on,” Allen and Parnes wrote. The only reason they didn’t, they explained, was an irritating chance problem: Sanders “was liked,” which meant going negative would backfire.

Hillary had had the same problem with Barack Obama, with whom she and her husband had elected to go heavily negative in 2008, only to see that strategy go very wrong. “It boomeranged,” as it’s put in Shattered.

The Clinton campaign was convinced that Obama won in 2008 not because he was a better candidate, or buoyed by an electorate that was disgusted with the Iraq War. Obama won, they believed, because he had a better campaign operation – i.e., better Washingtonian puppeteers. In The Right Stuff terms, Obama’s Germans were better than Hillary’s Germans.

If the ending to this story were anything other than Donald Trump being elected president, Shattered would be an awesome comedy, like a Kafka novel – a lunatic bureaucracy devouring itself. But since the ending is the opposite of funny, it will likely be consumed as a cautionary tale.

Shattered is what happens when political parties become too disconnected from their voters. Even if you think the election was stolen, any Democrat who reads this book will come away believing he or she belongs to a party stuck in a profound identity crisis. Trump or no Trump, the Democrats need therapy – and soon.

If you’re wondering what might be the point of rehashing this now, the responsibility for opposing Donald Trump going forward still rests with the (mostly anonymous) voices described in this book.

What Allen and Parnes captured in Shattered was a far more revealing portrait of the Democratic Party intelligentsia than, say, the WikiLeaks dumps. And while the book is profoundly unflattering to Hillary Clinton, the problem it describes really has nothing to do with Secretary Clinton.

The real protagonist of this book is a Washington political establishment that has lost the ability to explain itself or its motives to people outside the Beltway.

To win back America in 2018, we, via the Democratic party, or the nation-wide Indivisible movement, or its local counterparts like the Southern Arizona alliance4action, must recover that “ability to explain” a “powerful alternative account” of “why things are screwed up.” We must speak about a credible “reason for running.” Our Democratic forebears did it. We can too.