President Trump’s promise to enact a sweeping overhaul of the tax code is in serious jeopardy nearly 100 days into his tenure, and his refusal to release his own tax returns is emerging as a central hurdle to another faltering campaign promise.

As procrastinators rushed to file their tax returns by Tuesday, the White House press secretary, Sean Spicer, emphasized again on Monday that Mr. Trump had no intention of making his public. Democrats have seized on that decision, uniting around a pledge not to cooperate on any rewriting of the tax code unless they know specifically how that revision would benefit the billionaire president and his family.

And a growing roster of more than a dozen Republican lawmakers now say Mr. Trump should release them.

A tax overhaul could be the next expansive Trump campaign promise that falters before it even gathered much steam. 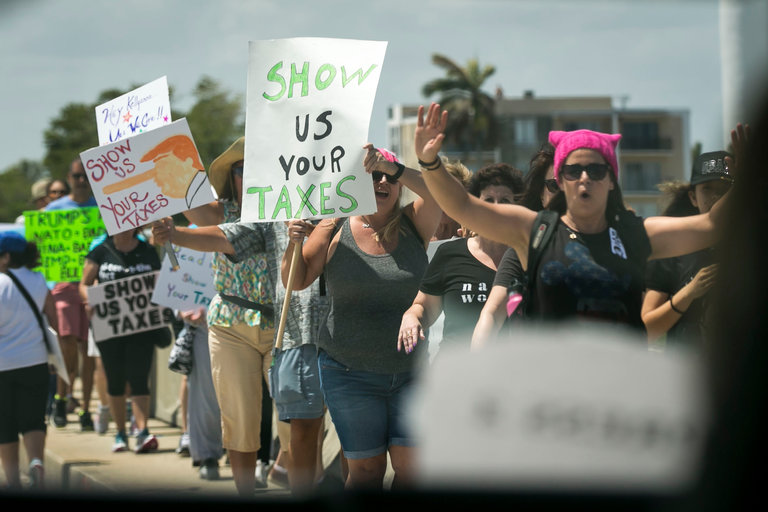 But it is Mr. Trump’s own taxes that have provided the crucial leverage for his opponents. More than 100,000 of his critics took to the streets over the weekend in marches around the country, demanding that the president release his returns. Tax legislation, they say, could be a plot by Mr. Trump to get even richer.

Those critics filled town halls around the country and Trump’s supporters in Congress came under fire. For example, The Week reported Sen. Tom Cotton jeered at town hall over Trump’s taxes.

Sen. Tom Cotton (R-Ark.) learned on Monday that the fastest way to get booed by your constituents is to defend President Trump’s failure to release his tax returns.

During a town hall in Little Rock with Rep. French Hill (R-Ark.), a raucous crowd called on Cotton to force Trump into releasing his taxes, with one person telling the senator it’s necessary in order for the public to find out if Trump has ties to foreign governments. “As far as I’m aware, the president said he’s still under audit,” Cotton replied. Trump has “won this fight already,” he added, and besides, “it doesn’t take a lot of effort to find out where Donald Trump has connections overseas, he normally has his names on buildings.”

Tens of thousands of people marched over the weekend ahead of Tax Day, calling on Trump to follow in the steps of previous presidents who released their tax returns. Trump has long claimed he is under audit and that’s why he can’t share his returns, even though the IRS has said nothing is legally preventing him from releasing the documents.

So there it is. Trump is lying about why he supposedly cannot release his tax returns. And he has now sucked Sen. Tom Cotton into the lie as well.

Finally, there was a telling exchange between Robert Reich, Anderson Cooper, and Jeffrey Lord on CNN, via Alternet, Robert Reich and Anderson Cooper Gang Up on Jeffrey Lord After Inane Trump Defense. It shows how shallow is the reason for Trump not releasing his tax returns. Audit, shmaudit. Maybe, just maybe, the mainstream media will catch on to Trump playing them for suckers. It’s a good read.

Posted by Sky Island Scriber at 7:11 AM