The Daily Star features an AP report on Flake’s recent town hall: Sen. Jeff Flake faces harsh criticism, boos at Arizona town hall. The reporter observed that “The senator is a moderate Republican …” We’ll get back to that at the end of this post.

PHOENIX — Sen. Jeff Flake felt the wrath of liberal constituents Thursday during a town hall in suburban Phoenix that produced a constant stream of boos, negative chants and angry criticism.

The crowd repeatedly chanted “you work for us” and “shame on you” in response to Flake’s answers during his first public event with Arizonans since January. The senator has faced withering criticism for his voting record and avoiding town hall gatherings in recent months.

The atmosphere quickly heated up as people hurled angry questions and disapproval at the Republican senator for his positions on health care, defunding Planned Parenthood and voting for Education Secretary Betsy DeVos.

One constituent was concerned with Trump’s trips to Mar-a-Lago, pressing Flake on whether or not he was concerned about it as well. Others brought up Trump’s refusal to release his tax returns. Cheers erupted when a teenage girl described growing up in poverty and attacking Flake for his stance on Planned Parenthood. 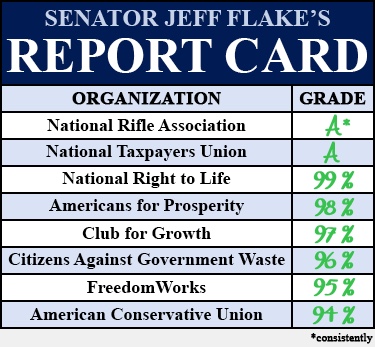 All those things and more are well-deserved barbs directed at a champion of conservative causes. Oops. Did I say conservative? How could I be so insensitive to the prevailing media wisdom that Flake is a moderate? For example, from the Star’s AP report: “The senator is a moderate Republican seeking a second term in 2018 …” See the graphic (from Flake’s own email to his constituents).

Posted by Sky Island Scriber at 6:29 AM