As a leader in the military, I learned a long time ago that if something was easy to fix, someone would have already fixed it. President Trump evidently hadn’t learned that prior to his election, but since then, has time and again realized that uh, YEAH, this shit is hard!

Take the border wall for example. It might have been good “red meat” for his supporters, but there are three good reasons why there is not a finished border wall along our southern border: 1) it is a very complicated endeavor, 2) it is really, really expensive, and 3) it won’t solve the problem of illegal immigration. I mean, get real! Trump isn’t the first politician to try to make hay with this issue, but the rhetoric always slams into reality eventually.

I knew for example in 2011, that Arizona Senator Steve Smith wasn’t going to get anywhere with his “www.BuildTheBorderFence.com” initiative and I was right. Smith promised to raise some $50 million to build a 15 foot fence at busy border-crossing points and erect fences where there were no federal fences. After three years however, the project had only raise $265,000, not even one-tenth of the $2.8 million needed to build the first mile of fencing. As for the $265,000, last I could find the advisory committee assigned to do something with the funding were asking sheriffs how they would use it.

I also knew Trump would never get the wall built and he sure as hell wasn’t going to get Mexico to pay for it. Recent negotiations over the continuing resolution have proven Trump’s real lack of commitment to demand the $25 billion or so his wall is estimated to cost.

I have personal experience with the border wall – or more accurately, the lack of a working border surveillance system. After my retirement from the Air Force, I was hired by L–3 Communications as Deputy Program Manager for the Strategic Border Initiative, or SBInet. This “virtual fence” that would stop illegal immigrants at the border with a mix of guard towers, cameras, sensors and other infrastructure feeding data to a sophisticated IT system, was President George W. Bush’s answer to the problem in 2006. As a subcontractor to Boeing, L–3 was responsible for designing and building the towers and microwave system that was to provide electronic surveillance for the Border Patrol. I worked on the project for almost seven months, but eventually quit because I just couldn’t continue to be a part of the fleecing of the government that was occurring. On one of my trips to field test the system, I was at Playas, New Mexico. I recall being out in the desert with a colleague driving around in circles for hours so that the microwave could try to lock in on us. It didn’t work, and when I went to a meeting at Boeing where I felt like they were sitting around joking about how we weren’t making progress, I decided I just couldn’t handle it anymore. Not even my writing my Congressman (Webb - Virginia) with my concerns had helped, since he never responded. That’s when I knew for my own piece of mind, it was time to resign.

In February 2008, a Government Accountability Office report cited that “the radar information was too slow to appear on screens, and was being inappropriately triggered by rain and other weather phenomena. Camera resolutions was insufficient for targets beyond 3.1 miles and the stylus-controlled laptops mounted on moving vehicles were not rugged enough and were difficult to use.” No surprise to me that the project was killed in 2011, after about $1 billion in taxpayer dollars were flushed down the drain.

Eventually, Border Patrol officials decided to take a look at preexisting, tested technology and a $145 million contract was awarded to a U.S. based subsidiary of Israel’s Elbit Systems. As of 2016, the IFT system had been used successfully at one installation on the border.
Using technology (including drones) to monitor the border though, is way different than building an actual wall over the entire 1,989 mile United States - Mexico border. For starters, the terrain is very rough in some areas, much of the land is privately owned (either by individuals or Native tribes), there are hundreds of tunnels in use, there are significant detrimental impacts on wildlife migration and survival with endangered species laws causing complications, and where there is a will, there is a way. As former Arizona Governor Janet Napolitano once said, “You show me a 50-foot wall, and I’ll show you a 51-foot ladder.” In fact, I remember a story told me by a Border Patrol agent who said that they once watched Mexican drug smugglers, drive up to a section of the border wall, push a button on a remote control to raise the wall like a garage door, drive through, and then close the door again. When there is money to be made, or a desperation to make something happen, people will find a way. 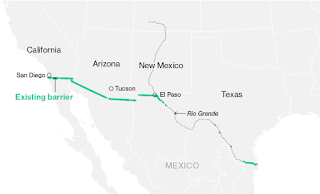 All this aside, the U.S. does already have barriers along 653 miles of the southern border (mostly the western portion.) These barriers range from 18-foot-tall iron fencing and corrugated metal to makeshift vehicle barriers and barbed wire. And “in 2015, the Border Patrol claimed an 81 percent success rate in apprehending or turning back people who attempted to cross illegally.” A large number of those trying to cross now though, are asylum seekers, who present themselves to border agents at legal ports of entry. The Department of Homeland Security also says that in FY2015, about 530,000 simply overstayed their legal visas after flying into the country, about 200,000 more than were caught at the border with Mexico. No amount of wall would have helped in these situations.

Oh by the way, the Mexican border isn’t the only one the U.S. shares and, the other one is twice as long. Wall proponents will often claim we must build it to keep out terrorists and weapons of mass destruction, but you almost never hear someone talking about our border with Canada. Because of the heavy forests and numerous bodies of water the two countries share, it is much easier to slip across undetected. If I was a terrorist, I know which border I’d pick to cross.

Finally, Bloomberg News reported in February 2017 that an August 2016 poll found that 61 percent of Americans are opposed to “building a wall along the entire border with Mexico,” and only 36 percent favored it. A Pew survey conducted in November-December 2016 revealed that only 40 percent of respondents thought building a wall was very important, or somewhat important. I suspect many of those who think the wall is important, live a long way away from the border and don’t really understand the issues at hand. Most of those who live along the border know building a wall is a fool’s folly as a separate poll in May 2016 of Southwest border city residents which found 72 percent of them opposed to it. What is really needed, says one, is a sensible immigration policy and enforcement of the laws intended to prevent U.S. companies from hiring undocumented immigrants. Supply and demand anyone?

Ah yes, but then that would hurt the corporations and we can’t have that, can we? Better to make American citizens fork over the $25 billion of their hard earned taxpayer dollars to build the almost 2,000-foot-long 40-foot-high concrete wall President Trump wants so he can keep a campaign promise that won’t fix the problem. Hmmmmm, wonder if 45 owns stock in any concrete companies?
Posted by Linda Lyon at 6:56 AM