AZBlueMeanie (Blog for Arizona) gives us A preview of the March for Science. (In Tucson, it’s the Rally for Science.)

Scientists, and those who just love scientific method, will march on Washington, D.C. (and hundreds of satellite marches around the globe) this Saturday in support of scientific research and scientific-based public policy decision making. The March for Science explained [quoting from vox.com]:

Scientists have more reason than ever to march against Trump 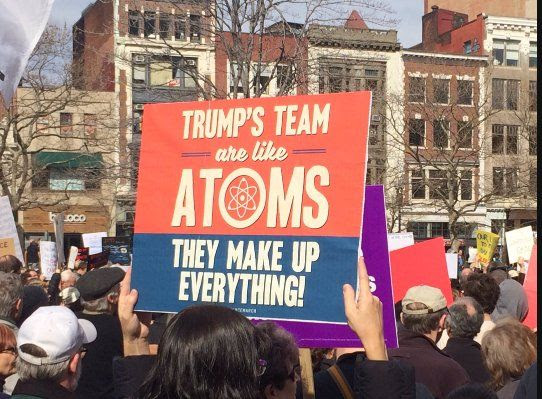 At the very least, the Science March will be a celebration of the scientific method and its ability to inform policy. With Trump in the Oval Office, scientists have been watching their disciplines lose their seats — perhaps permanently — at the nation’s decision-making tables. The hope is that the march will leave an impression: Science matters.

Jonathan Berman, a biology postdoc at the University of Texas Health Science Center … purchased the web domain MarchForScience.com, and set up a Facebook and Twitter account. The march will “send the message that we need to have decisions being made based on a thoughtful evaluation of evidence,” he says. And all of a sudden, he had a movement. (Some 521,000 had “liked” the march on Facebook as of Tuesday.)

But the march organizers are also trying to thread a tough needle with their goals: opposing the anti-science policies of the Trump administration, while furthering the message that science is not a partisan issue. (How precisely to thread the needle on these issues — and how strongly to add issues of diversity, identity, and inclusion to the roster of march causes — has been an ongoing debate around the event.)

Anti-science agendas and policies have been advanced by politicians on both sides of the aisle, and they harm everyone — without exception. Science should neither serve special interests nor be rejected based on personal convictions. At its core, science is a tool for seeking answers. It can and should influence policy and guide our long-term decision-making.

Use your imagination, be creative, and let your inner science geek fly in your protest signs. You can share your favorite protest signs to the Blog for Arizona Facebook page.

Here is the link to the poster with details for the Tucson rally.

Posted by Sky Island Scriber at 7:07 AM