Why Martha McSally might be worried about Trump's lousy approval ratings

Gallup released polling data on Trump’s first quarter in office. The Donald’s ratings are the lowest since WWII.

Here’s the summary from the HuffPollster morning email.

GALLUP GIVES TRUMP HISTORICALLY LOW FIRST-QUARTER RATINGS - HuffPollster: “President Donald Trump received substantially worse ratings for his initial months in office than any other president elected to his first term since World War II, according to Gallup. Even presidents who’ve gone on to be unpopular generally enjoyed high ratings during their first months in office. But Trump’s average rating since Inauguration Day is just 41 percent, Gallup finds, making him the only president in their polling history to fall short of majority approval during his first quarter. Former President Bill Clinton, the next-lowest ranked, had an average approval rating of 55 percent for that time period, while former Presidents Barack Obama and George W. Bush enjoyed first quarter ratings of 63 percent and 58 percent, respectively.” [HuffPost, Gallup]

An increasing divide along partisan lines - More from HuffPollster: “What sets Trump apart isn’t a lack of support from his own party. About 87 percent of Republicans approve of his performance, several points above the average for previous presidents and similar to the numbers Obama and Bush saw at this point in their presidencies. Rather, Trump’s ratings reflect the near-complete absence of support from Democrats, just 9 percent of whom approve of his performance so far. Americans’ willingness to support a president across the aisle has shrunk dramatically in recent years. This early in their terms, former Presidents Dwight Eisenhower, John F. Kennedy, Richard Nixon and Jimmy Carter all saw majority support from their opposing party, a feat that seems almost unimaginable in the modern political environment. But Obama still managed to garner the approval of about 30 percent of Republicans during the first quarter of 2009, while Bush saw a 32 percent rating among Democrats in the first quarter of 2001.” Another way of looking at it: Republicans are 78 points more likely than Democrats to approve of Trump’s job performance. Until Clinton took office, that gap was never above 50 points.

The graph below, from the Huff Post report, summarizes the historical data. 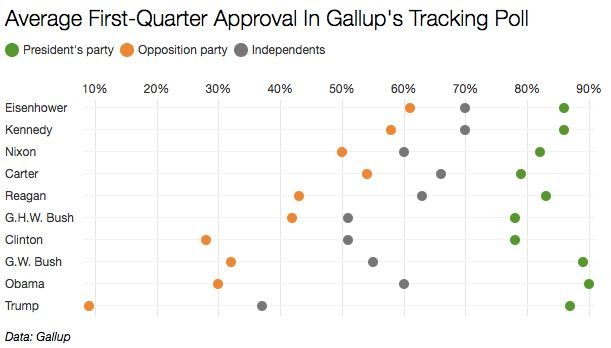 The percentages of Trump’s approval by major affiliation are: Republican (87%), Democrat (9%) and Independent (37%) (last line of graph above).

So, if the national approval ratings are predictive of CD2, and if those ratings hold up through 2018, and if McSally’s voting record (100% Trump) equates to approval for Trump, then Martha McSally is vulnerable, predicted to carry only 43.8% of the CD2 vote.

If Dems can turn out the vote in 2018, and run an electable progressive candidate, then CD2 can flip back to Democratic.

Posted by Sky Island Scriber at 7:15 AM