It should come as no surprise to anyone that teachers around the country are jumping ship at an alarming rate. According to the Wall Street Journal,public educators “quit at an average rate of 83 per 10,000 per month in the first 10 months of 2018” – the highest rate for public educators since 2001.

One obvious reason for teachers leaving the classroom is the low salaries many still earn. In an analysis of census data, the Center on Budget and Policy Priorities noted that in at least 12 states, public education budgets are down some 7% from 2009 levels, adjusted for inflation. U.S. teacher pay (adjusted for inflation) says the National Education Association, is now 5% lower than it was in 2009. And, a 2017 report from the Organization for Economic Cooperation and Development“ found that teachers in the U.S. earn far less than people with similar education levels who are working other jobs. American teachers make, on average, between 55 and 59 percent of the salaries of other professionals with comparable schooling levels.”

Even so, pay is not the only reason teachers are fleeing classrooms. They also cite inadequate public respect and increased accountability without appropriate support. In Arizona specifically, contributing factors include 25% of our certified teachers being retirement eligible, a grading system for schools that still relies heavily on standardized tests, a GOP-led Legislature that is very pro-school choice if not openly hostile to public district education and their teachers, and the lack of respect for the teaching profession demonstrated by the dumbing down of teacher qualification requirements.

That last 1,404 certificates issued for the current school year is probably the most instructive, because this is after the 10 percent raises for teachers the #RedforEd movement garnered in 2018. So, less than one-third of the way into the school year, the state has issued almost half as many certificates to untrained teachers as the entire previous year. In other words, despite the 10% pay increase, Arizona districts are having even more difficulty attracting professional teachers into their classrooms.
Part of the problem is no doubt an improved economy. After the 2008 recession, the classroom was a safe place to be employed; other jobs just weren’t to be had. Now though, teachers have other options.

That, combined with the aforementioned factors, is putting school district governing boards in a bind. As the past president of the Arizona School Boards Association, believe me when I tell you that governing boards do not want less than fully qualified teachers in their district’s classrooms. But, when push comes to shove, sometimes they are left with little choice. And although a 2017 AZ Republic statewide examination of teacher quality found that “it is rare for schools to fill full-time teaching positions using Emergency Substitute Certificates” (requiring only a high-school diploma), in 2016–17 more than 40 of those teachers were leading classrooms. The Republic also found that "22 percent of 46,000 Arizona teachers either did not meet the state’s basic qualifications or had less than three years’ teaching experience.” And, that over 62% of the state’s almost 8,600 teacher vacancies either had not been filled or were filled with people who couldn’t qualify for a standard teaching certificate. 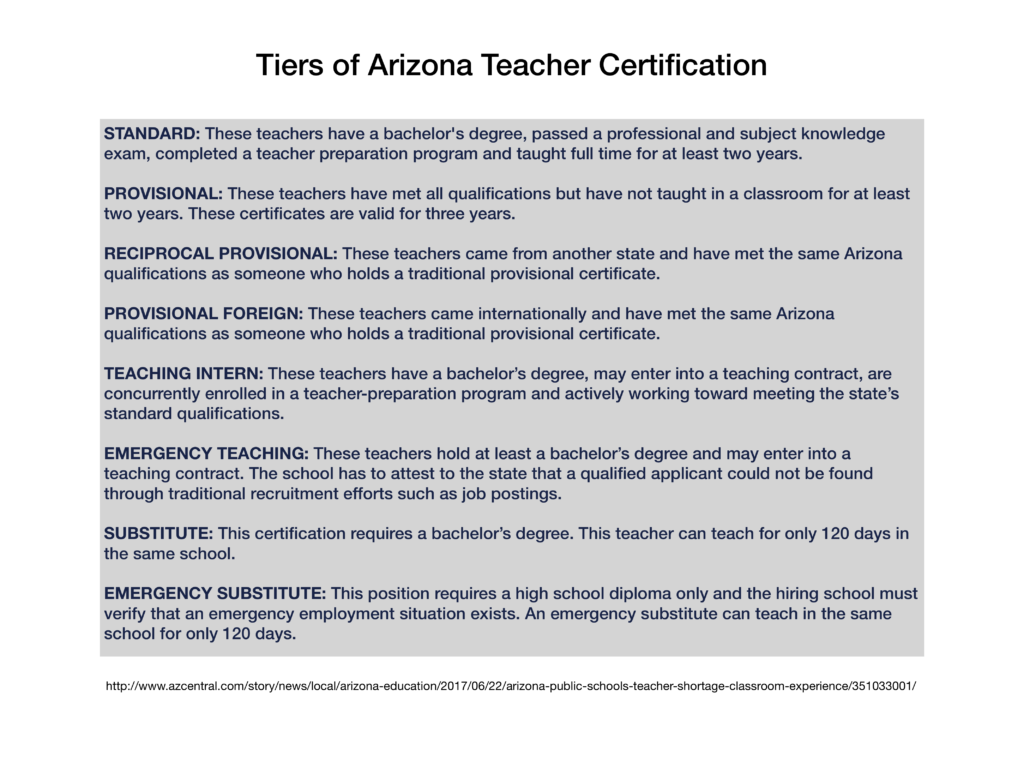 Some argue that standard certification, which in Arizona requires a bachelor’s degree, passing a professional and subject knowledge exam, completing a teacher preparation program and teaching full-time for at least two years, is not important. After all “they” say, (pandering to liberals no doubt), if Ruth Bader Ginsberg wanted to teach civics in Arizona, she wouldn’t qualify for a standard certification. Well, just because someone is a Supreme Court Justice, doesn’t mean they know how to teach. We’ve all met really smart people who couldn’t communicate what they knew. Pedagogy, the art of teaching, is a learned skill.

What it really comes down to, is whether or not we believe teaching is a profession worthy of appropriate compensation, investments in professional development and the autonomy to appropriately practice their craft. I believe the answer, with our future hanging in the balance, is an easy one.