Income injustice by the numbers

The gap between the haves and have-nots in the United States grew last year to its highest level in more than 50 years of tracking income inequality, according to Census Bureau figures.

Income inequality in the United States expanded from 2017 to 2018, with several heartland states among the leaders of the increase, even though several wealthy coastal states still had the most inequality overall, according to figures released Thursday by the U.S. Census Bureau.

The nation’s Gini Index, which measures income inequality, has been rising steadily over the past five decades.

We are in the middle being neither perfectly equal nor perfectly unequal; relatively few U. S. households have most of the income.

According to the GINI index (World Bank estimate) - Country Ranking we are in another middle. We rank 59th among 158 countries and are sandwiched between Uganda and Haiti.

Another marker of extreme economic injustice in the U. S. is the differing tax rates between the haves and have nots. David Leonhardt (NY Times) reports that The Rich Really Do Pay Lower Taxes Than You.

Almost a decade ago, Warren Buffett made a claim that would become famous. He said that he paid a lower tax rate than his secretary, thanks to the many loopholes and deductions that benefit the wealthy.

His claim sparked a debate about the fairness of the tax system. In the end, the expert consensus was that, whatever Buffett’s specific situation, most wealthy Americans did not actually pay a lower tax rate than the middle class. “Is it the norm?” the fact-checking outfit Politifact asked. “No.”

Time for an update: It’s the norm now.

For the first time on record, the 400 wealthiest Americans last year paid a lower total tax rate — spanning federal, state and local taxes — than any other income group, according to newly released data.

That’s a sharp change from the 1950s and 1960s, when the wealthy paid vastly higher tax rates than the middle class or poor.

Since then, taxes that hit the wealthiest the hardest — like the estate tax and corporate tax — have plummeted, while tax avoidance has become more common.

President Trump’s 2017 tax cut, which was largely a handout to the rich, plays a role, too. It helped push the tax rate on the 400 wealthiest households below the rates for almost everyone else. 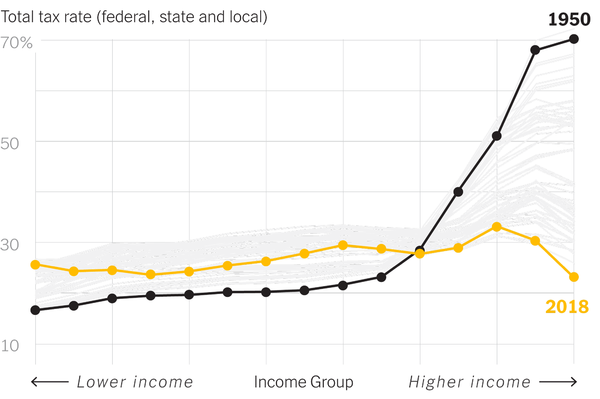 The data here come from the most important book on government policy that I’ve read in a long time — called “The Triumph of Injustice,” to be released next week. The authors are Emmanuel Saez and Gabriel Zucman, both professors at the University of California, Berkeley, who have done pathbreaking work on taxes. Saez has won the award that goes to the top academic economist under age 40, and Zucman was recently profiled on the cover of Bloomberg BusinessWeek magazine as “the wealth detective.”

They have constructed a historical database that tracks the tax payments of households at different points along the income spectrum going back to 1913, when the federal income tax began. The story they tell is maddening — and yet ultimately energizing.

By the middle of the 20th century, the high-tax advocates had prevailed. The United States had arguably the world’s most progressive tax code, with a top income-tax rate of 91 percent and a corporate tax rate above 50 percent.

But the second half of the 20th century was mostly a victory for the low-tax side. Companies found ways to take more deductions and dodge taxes. Politicians cut every tax that fell heavily on the wealthy: high-end income taxes, investment taxes, the estate tax and the corporate tax. The justification for doing so was usually that the economy as a whole would benefit.

The justification turned out to be wrong. The wealthy, and only the wealthy, have done fantastically well over the last several decades. G.D.P. growth has been disappointing, and middle-class income growth even worse.

The American economy just doesn’t function very well when tax rates on the rich are low and inequality is sky high. It was true in the lead-up to the Great Depression, and it’s been true recently. Which means that raising high-end taxes isn’t about punishing the rich (who, by the way, will still be rich). It’s about creating an economy that works better for the vast majority of Americans.

And let us be clear. The trend toward greater and greater inequality has been nearly perfectly linear over the last 50 years - regardless of which political party was in control of Congress or the White House.

As part of their proposed tax policies:

… Saez and Zucman sketch out a modern progressive tax code. The overall tax rate on the richest 1 percent would roughly double, to about 60 percent. The tax increases would bring in about $750 billion a year, or 4 percent of G.D.P., enough to pay for universal pre-K, an infrastructure program, medical research, clean energy and more. Those are the kinds of policies that do lift economic growth.

… Saez and Zucman also favor a wealth tax; Elizabeth Warren’s version is based on their work. And they call for the creation of a Public Protection Bureau, to help the I.R.S. crack down on tax dodging.

So a way forward is clear. The question remains: do we have the will to take it or do we let the 400 rule?

Posted by Sky Island Scriber at 8:03 AM